Extern is Ireland’s leading social justice charity.  The organisation wanted to launch a campaign to fund-raise for its Safe Havens and to further grow awareness of its work.

Extern’s safe haven had developed a great concept for its video, and we worked with them on scripting, casting, filming on location, etc. to create this online advert.

The campaign was widely praised and helped achieve the objectives set out. Extern is the official charity of Ulster Rugby and a second edit was created to be shown on big screens at Kingspan Stadium aimed at driving text donations from fans. 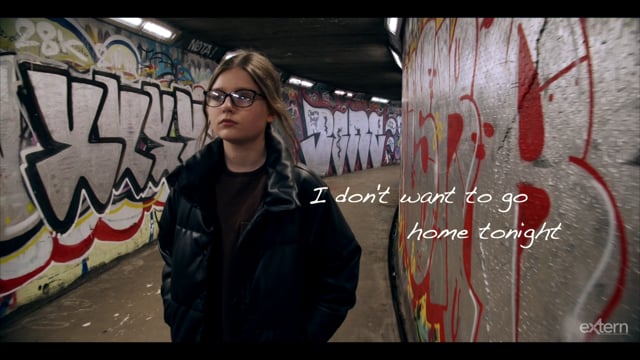 An online advert for highly successful fundraising and awareness campaign.

This site uses cookies. We'll assume you're ok with this, but you can opt-out if you want.
Cookie SettingsAccept All
Manage consent

This website uses cookies to improve your experience while you navigate through the website. Out of these, the cookies that are categorized as necessary are stored on your browser as they are essential for the working of basic functionalities of the website. We also use third-party cookies that help us analyze and understand how you use this website. These cookies will be stored in your browser only with your consent. You also have the option to opt-out of these cookies. But opting out of some of these cookies may affect your browsing experience.
Necessary Always Enabled
Necessary cookies are absolutely essential for the website to function properly. These cookies ensure basic functionalities and security features of the website, anonymously.
Functional
Functional cookies help to perform certain functionalities like sharing the content of the website on social media platforms, collect feedbacks, and other third-party features.
Performance
Performance cookies are used to understand and analyze the key performance indexes of the website which helps in delivering a better user experience for the visitors.
Analytics
Analytical cookies are used to understand how visitors interact with the website. These cookies help provide information on metrics the number of visitors, bounce rate, traffic source, etc.
Advertisement
Advertisement cookies are used to provide visitors with relevant ads and marketing campaigns. These cookies track visitors across websites and collect information to provide customized ads.
Others
Other uncategorized cookies are those that are being analyzed and have not been classified into a category as yet.
SAVE & ACCEPT